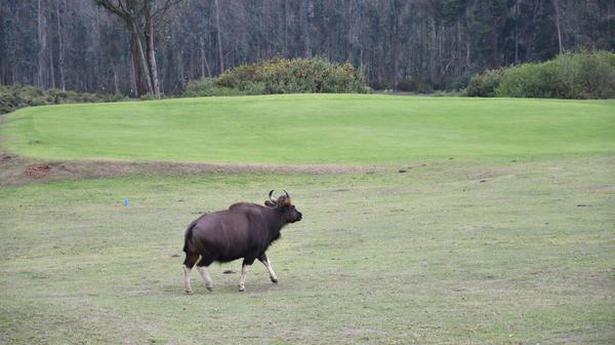 
The first population estimation exercise of the Indian gaur carried out in the Nilgiris Forest Division in recent years, which was conducted in February of this year, has revealed that more than an estimated 2,000 Indian gaurs inhabit the entire division.

Worryingly, the exercise has also revealed that the majority of the animals in “conflict-prone” areas in the division live perilously close to human habitations due to habitat loss and fragmentation, exacerbating the probability of having problematic interactions with humans.

According to statistics revealed by the Forest Department, 794 gaurs were directly sighted over a one-week period during the exercise. The direct sightings were by the Department staff and volunteers who were involved in the exercise.

K. Vijayakumar, Senior Project Officer, Worldwide Fund for Nature-India, who assisted the Department during the exercise, said that it was estimated that there were more than 2,000 Indian gaurs across the division, with an average of eight individuals per square kilometre.

The Department officials said that the decision to also estimate the population of Indian gaur, alongside other major fauna in the division, especially around the major towns of Coonoor, Udhagamandalam, Kotagiri and Kundah was necessitated by an increase in the number of problematic human-gaur interactions in the Nilgiris over the last few years. In 2019, three people were killed and seven others injured by Indian gaur.

It was noticed that a majority of the gaurs seen around Kundah, Kotagiri, Coonoor and Kattabettu, where a majority of these interactions occurred, preferred to inhabit tea estates and human settlements, while the animals largely avoided forested areas. Officials said that the reasons for this could be due to the easy availability of food in and around human settlements, the lack of threat from predators, and the spread of invasive flora into reserve forests.

“Moreover, many of these ‘conflict-prone’ regions are witnessing changing land-use patterns, with what were tea estates being converted into resorts and buildings. This also translates to fences becoming more prominent around these properties and severely limiting traditional pathways used by the gaur to move between habitats,” said a Forest Department staff from the Nilgiris division.

Although there were sizeable populations of gaurs in other areas, such as in Pykara and Naduvattam, interactions with humans were comparatively less due to native forests being largely free of invasive flora, and land-use patterns also remaining relatively stable, officials said, making it clear that increasing human pressures were leading to problems.

The notion that more Indian gaur are being spotted within the towns due to a steady increase in their population over the last decade could also be misguided. Officials said that, on average, a total of 60 gaurs die each year in the Nilgiris Forest Division, many due to accidents related to living close to human habitations.

District Forest Officer, Nilgiris division, D. Guruswamy, said that a further gaur census need to be conducted in the coming years to accurately gauge the dynamics of the Indian gaur population in the Nilgiris division.

“This is the first population estimation exercise which has been conducted in the division in recent years. We will need to continue to conduct such periodic estimations to ascertain whether the population of gaurs is increasing or if the population is stable,” said Mr. Guruswamy.

In the present day’s cache | TikTok is testing social networking characteristic, and extra Considering forward: Can transport containers turn out to be vaccination models?